Washington, DC – Three outstanding Filipino-American organizations and a major FilAm retail chain will be honored with Loving Cups at the 3rd Alex Esclamado Memorial Awards for Community Service on August 16, 2019. The awards ceremony is one of the highlights at the 13th National Empowerment Conference of the National Federation of Filipino American Associations (NaFFAA). The conference is scheduled August 15-18. at the Carson Community Center in Carson City, California.

This year’s awardees are: Filipino Veterans Recognition and Education Project (FiVetsREP) for promoting the welfare of World War II Filipino veterans and for successfully lobbying for the conferment of the Congressional Gold Medal on the veterans, living and dead; the Filipino American National Historical Society (FANHS) for promoting Flipino history in the United States and for initiating the annual observance of FilAm History Month; the Philippine American Cultural Foundation (PACF) of Chicago for promoting Philippine arts, culture and history and for installing the first full-body monument of Dr. Jose Rizal in a city/state park in America; and the Seafood City Group for creating virtual Filipino community centers in its 28 stores across the US and consistently supporting community causes.

This was announced by the NaFFAA Board of Governors jointly with the principal sponsor of the awards, GMA International, through the Awards Committee.

The Alex Esclamado Awards were conceived by GMA International to honor the legacy of community service of the late NaFFAA founding chairman. The awards are conferred on Filipino American organizations and associations in the United States, including
those that are not members of NaFFAA, that have been engaged in any of the following aspects of Community Service: Youth Affairs, Education, Senior Citizens, Women, Health, Immigration & Human Rights, Entrepreneurship, Arts & Culture, Aid to the Philippines, Civic Involvement.

Nominees for the 1st and 2nd Alex Awards, like FANHS and PACF, were considered automatically re-nominated. New nominees were Montero Medical Mission, Seafood City and FilVetsREP.

“These awards are intended to encourage and inspire community workers, volunteers and leaders to continue their selfless endeavors in the service of their respective communities – whether Filipino or mainstream American,” says NaFFAA National Chair Brendan Flores. “This is also intended to honor the legacy of the late Alex Esclamado, NaFFAA Founding Chairman,visionary for Filipino-American unity and empowerment, crusading journalist and recipient of the Philippine Legion of Honor.”

Past Awardees
The winners in the 2nd awards presentation in August 2016 at the 12th NaFFA National
Empowerment Conference at the Valley Forge Casino Resort in King of Prussia, Pennsylvania were: Filipino Cultural School based in Norwalk, Los Angeles County; Filipino American Association of Philadelphia, Inc.; Filipino American Community Action Group of Hampton Roads, Va.; and Feed the Hungry, based in Washington DC.

They joined the winners of the 1st awards in 2014, namely, The Council for Filipino American Organizations of Central Florida, the West Bay Pilipino Multi-Service, Inc., Philippine American Chamber of Commerce of Texas, and the Pilipino American Unity for Progress, Inc.

GMA International Sponsorship
Conceived by GMA International the awards were first conferred in August 2014 at the 11 th National Empowerment Conference in San Diego, CA. GMA International is the international arm of GMA Network, the leading television network in the Philippines, which has been telecasting in the US and worldwide through GMA Pinoy TV, GMA Life TV and GMA News International. GMA has been a consistent supporter and partner of NaFFAA in manypublic service and FilAm community undertakings.

‘We congratulate these year’s awrdees and we congratulate NaFFAA for continuing to empower and inspire the Filipino community in the United States. We hope that our partnership as well as all the good work that has already been done will continue into the future,” said GMA First Vice President and Head of International Operations Joseph T. Francia. GMA International will be represented at the awards by Josh Andowitt, Southern California Marketing Consultant.

“NaFFAA is grateful to GMA International for sponsoring the Alex Esclamado Memorial
Awards for Community Service. This has not only kept the legacy of Alex Esclamado fresh in the minds and hearts of the FilAm community, it has inspired many to take up his advocacies and has cast the limelight on the many organizations that have heroically been rendering outstanding services in the FilAm communities, the American mainstream and in the Philippines,” said Macabenta.

The Alex Esclamado Awards will be held in the evening of Day 2 of the 13th National Economic Empowerment set on August 15th to 17th  in Los Angeles. To register to attend or make a contribution to NaFFAA’s mission, visit www.naffaa.org. 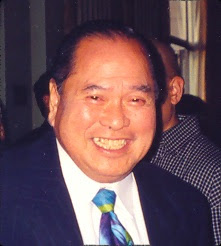